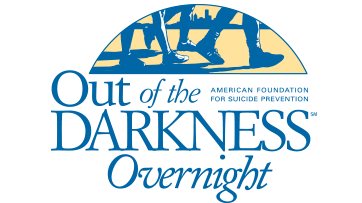 Registration is now open for the 2014 Out of the Darkness Overnight Walks in Seattle, WA and Philadelphia, PA.

The following information is taken directly from the AFSP website. For more information, or to register, please visit: http://afsp.donordrive.com/index.cfm?fuseaction=donorDrive.eventList&eventGroupID=9AA117B3-F522-BB6D-359D1AA2D75A7958

Net proceeds from the Out of the Darkness Community walks benefit the American Foundation for Suicide Prevention (AFSP), the leading national not-for-profit organization exclusively dedicated to understanding and preventing suicide through research, education and advocacy, and to reaching out to people with mental disorders and those impacted by suicide. To learn more about AFSP’s mission, research and programs visit: www.afsp.org

WALK TO SAVE LIVES
IN THE UNITED STATES, a person dies by suicide every 13.7 minutes, claiming more than 38,000 lives each year. It is estimated that an attempt is made every minute; with close to one million people attempting suicide annually. Suicide is the fourth leading cause of death in the U.S. among adults 18-65, and the second leading cause of death among teens and young adults. The suicide rate among U.S. military members rose sharply in 2012, with an average of one suicide per day

WALK TO HONOR LOVED ONES
Suicide is a public health issue that does not discriminate by age, gender, ethnicity, or socio- economic status, and it takes an enormous toll on family, friends, co-workers, and the entire community. AFSP provides opportunities for survivors of suicide loss to get involved through a wide variety of educational, outreach, awareness, advocacy and fundraising programs.

WALK TO RAISE FUNDS
A contribution to AFSP is a good investment! More than 82 cents of every dollar you raise can be used to:

When you walk in AFSP’s Out of the Darkness Community Walks, you join the effort with thousands of people in hundreds of cities to raise funds and awareness for AFSP’s vision to create a world without suicide.

The importance of the American Foundation for Suicide Prevention’s mission has never been greater, nor its work more urgent

REGISTER…
DONATE…
START A WALK NEAR YOU…
Join the Movement Today!